8 In those days when there was again a great crowd without anything to eat, he called his disciples and said to them, 2 “I have compassion for the crowd, because they have been with me now for three days and have nothing to eat. 3 If I send them away hungry to their homes, they will faint on the way—and some of them have come from a great distance.” 4 His disciples replied, “How can one feed these people with bread here in the desert?” 5 He asked them, “How many loaves do you have?” They said, “Seven.” 6 Then he ordered the crowd to sit down on the ground; and he took the seven loaves, and after giving thanks he broke them and gave them to his disciples to distribute; and they distributed them to the crowd. 7 They had also a few small fish; and after blessing them, he ordered that these too should be distributed. 8 They ate and were filled; and they took up the broken pieces left over, seven baskets full. 9 Now there were about four thousand people. And he sent them away.

One of the things that was mentioned a few minutes ago when Cottie and I were giving our update on the Annual Conference was the award this congregation has received for what the Bishop calls, “Risk Taking Ministry”. When our District Superintendent was introducing the award, one of the things he mentioned about our risk taking ministry were the ads that we have been running in the Lewiston Tribune. He called them openly progressive, if I remember correctly, and I would have to agree with that assessment. Many of you have commented on the ads and I think most have seen some of them at one time or another. 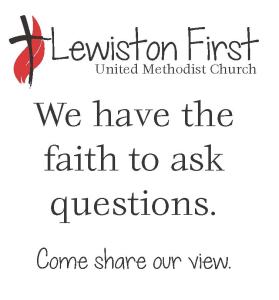 My first response to what I mean is that I don’t always just settle for the first impression of a text, nor do I just settle for a literal interpretation and take the story at face value and not pursue it any further. By asking questions and wondering a little bit about the text, and using some imagination, you can often get a great deal more from a text than just the surface story. I think the story of the feeding of the 4,000 is a great example of the kind of text I’m talking about.

You see, if we just read the story without asking any questions, we simply are informed about another event where Jesus performed a miracle. It doesn’t matter if you believe in the miracle or not, unless you ask a few questions, nothing really happens with this text. As a matter of fact, it is less than nothing, because in the case of Mark, this is the second time Jesus fed a crowd and the two stories read about the same. So if you simply read and accept, you are missing a great deal.

For example, why do you suppose that in two of the four Gospels, we have two stories where a great crowd is fed, and in the other two Gospels we only have just one? That’s an interesting question, isn’t it? In Mark and Matthew we have both stories; the feeding of the 5,000 and the story of the feeding of the 4,000 which I just read a minute ago.

Just to make it even more interesting, we know that the author of Matthew and the author of Luke both had copies of the Gospel of Mark while they were writing their own Gospels. This means that Matthew made a deliberate decision to include both stories, and Luke made a deliberate decision to only include the one story, the story of the 5,000. Why do you suppose that is?

Maybe that’s what Luke thought; these are too much the same, I’m going to leave one out. On the other hand, maybe Matthew thought that there was so much good information in the story that it needed to be repeated, so he followed Mark’s lead and put it in twice.

See how much fun we can have by asking questions?

But here’s the real truth of the situation. When we read the New Testament and particularly the Gospels, we learn a little bit about Jesus. But if what we learn isn’t applicable to our lives, then it really doesn’t do us much good, does it? I think there is something we should keep in the very front of our thinking when we read the stories of Jesus and it might shock some of you to hear this. This may also be a good time for the Pastor Chuck disclaimer; these are my thoughts and my ideas, they don’t have to be your thoughts and your ideas, but I do ask that you think about it.

So, now I’m going to go back to my shocking news of what we should be thinking about when we read the stories of Jesus. I think we should keep in the front of our thinking that the stories are not really about Jesus, they are about us. Jesus never really said “it’s all about me” but he mentioned many times how it is about us; what we are to do, who we are to become, what example we can follow and how we contain the kingdom of God within us. It’s not about Jesus; it is about us.

If you can think about that for minute, then you will see that we would never unearth how a story about Jesus feeding 5,000 or 4,000 or both could ever be about us, unless we ask questions. Only by asking the right questions can we find the ways to make the stories not so much about Jesus, but about how we can follow the example of Jesus, and make the stories about us. The stories need to be about us; after all, who were they written for? The stories are not there for the benefit of Jesus!

One question you might ask about these stories is how they are similar and what themes develop among them that might be useful for us today in the 21st century. I asked that question and made a list. This is what I came up with.

With Jesus there is abundance.

Give thanks for what you have.

Don’t focus on why it can’t be done.

Use what is available.

The return is more than what you gave.

Sit down when you eat.

Do what you can, and others will too.

Sorry about the unavoidable pun, but that is food for thought.